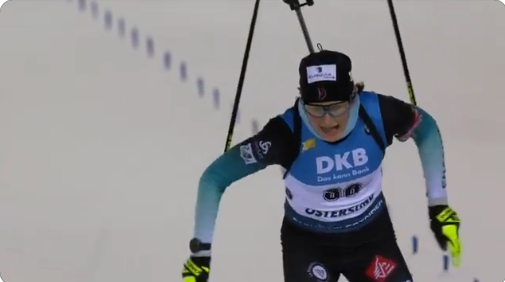 Justine Braisaz won this «lottery» individual race. She had two mistakes, but other opponents had at the same count of mistakes or more. Just several athletes have a one or fewer mistakes: Dzhima, Tandrevold, Gaim and Zdouc.

Yuliya Dzhima - the only one biathlete who did 20/20 in this race. After last shooting, she had 6 seconds gap before Justine Braisaz, and it looks like Dzhima lost all advantage and failed the last lap, but no! She lost just 15 seconds, miss ahead just Braisaz and get the second place.

Third place for one more French (what they allow yourself?) - Julia Simon.

Lena Haecki and Doro Wierer today was the faster skier, but they missed three times, and get 6th and 7th positions.