Second victory for Lisa Hauser this season, Simon and Chevalier on the podium 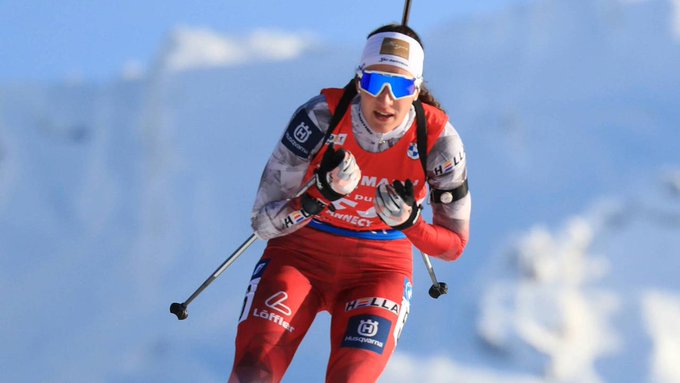 The women's race promised to be more unpredictable than the men's. Although Johannes Dale gave much pleasure.

Already after the first shooting, Hanna Oeberg and Denise Herrmann made it difficult for themselves by missing once. In addition, Herrmann, like yesterday, had no pace on the skies, and she continued to lose ground even during the second lap. Lisa Vittozzi and Linn Persson immediately fell out of the fight for the victory, two misses each for the Italian and the Swede, who won medals in the pursuit the day before.

Julie Simon decided not to increase the pace, and allowed her rivals to approach. Hauser, Jeanmonnot, Anais Chevalier, Elvira Oberg, Davidova, Tandrevold, and even Anna Magnusson - all athletes almost simultaneously came to the second firing line.

But Simon and Jeanmonnot made a miss, and Davidova said goodbye to the reliable medalist, missing twice.

Elvira Oberg, although she became the formal leader, chose to act cautiously and not disperse the group. Yesterday, such a tactic of a moderate pace, allowed her to make 20 out of 20.

Anais Chevalier delighted the local crowd as she was the only one of the top 4 who managed to do without penalty loops. Following her, Anna Magnusson and another Frenchwoman, Chloe Chevalier, went to the fourth lap. Tandrevold, Oeberg and Hauser were 21 seconds behind at this point. Julie Simon was 32 seconds behind the leader.

At the final shooting, Anais Chevalier missed the first shot, but closed the other 4 targets, giving her rivals a chance. But only Lisa Hauser was able to take advantage of this chance, she became a leader of the race with a 7-second lead over Julie Simon and Anais Chevalier.

But the French were tired, and their 7-second gap turned into 15 seconds already at the first checkpoint. And in the background loomed Elvira Oberg and Sophie Chauveau. But the more experienced French women held out, and still made it to the finish line. Lots of France at the flower ceremony. Sophie Chauveau 5th, Lou Jeanmonnot 6th.