Johannes Dale won the mass start, the Norwegians again on the podium 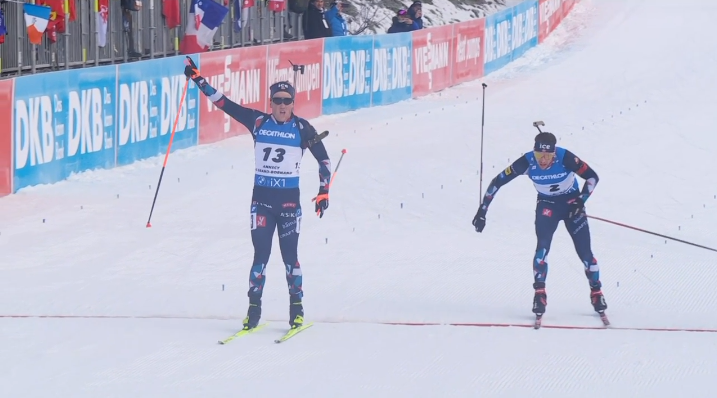 Yesterday's problems of Johannes Boe and some other biathletes were related to waxing and skiing, but not their physical condition.

Already by the first shooting, the peloton was a bit stretched, and the leaders managed to shoot cleanly. Johannes Boe, Christiansen, Laegreid led the race on lap two, Quentin Fillon Maillet and Johanness Dale were 7 seconds behind. The Norwegian decided to catch up with his team, while the Frenchman chose not to force and go at his own pace. As a result, a group of four Norwegians came to the second range with a 12-second advantage.

Surprisingly, for the first fifteen people, there was only one miss, its author was Emilien Jacquelin. Therefore, the gaps were approximately preserved, although Laegreid had a 7-second gap over the others due to fast shooting, but he was quickly caught up.

But on the standing has already begun interesting. Here, on the contrary, only a couple of people were able to make 5 out of 5, the rest went to run penalty loops.

Boe, Christiansen and Laegreid - 1 miss, Dale - 2 misses. But don't worry, there are still four Norwegians ahead. It was Filip Andersen who broke into the leading group thanks to clear shooting. Also, Sebastian Stalder was able to knock out all the targets, but he was 8 seconds behind the Norwegians, and could not keep up their pace, however, like Andersen.

Fabien Claude to the range, almost caught up with the Norwegians, but paid for it with two misses. Everything went wrong for the Swedes, all three were outside the top 20. And Samuelsson was the last one at all.

The drama began at the last shooting. Here only Laegreid missed once, but Boe, Christiansen and Andersen were sent to two penalties loops.

Stalder was able to create a miracle, who went to the final lap in second place, with an 8-second lag behind the leader. Johannes Dale also managed 5 out of 5 and was two seconds behind the Swiss. Unfortunately, Stalder quickly gave up and ended up not even making the top 6.

But Johannes Dale reduced the 10-second gap from Laegreid, and on the last climb he passed him. It seemed that Dale began celebrating too early, because from the descent to the finish line he had an advantage of no more than one second, and already 70 meters before the finish line he relaxed and began to celebrate, at the same time Laegreid gave all, made a lunge, but he couldn't overtook Dale.

Fabien Claude was able to squeeze into 4th place between the Norwegians, because there are two more in 5-6 positions: Vetle Christiansen and Tarjei Boe.