Anna Magnusson's unexpected and first victory at the World Cup 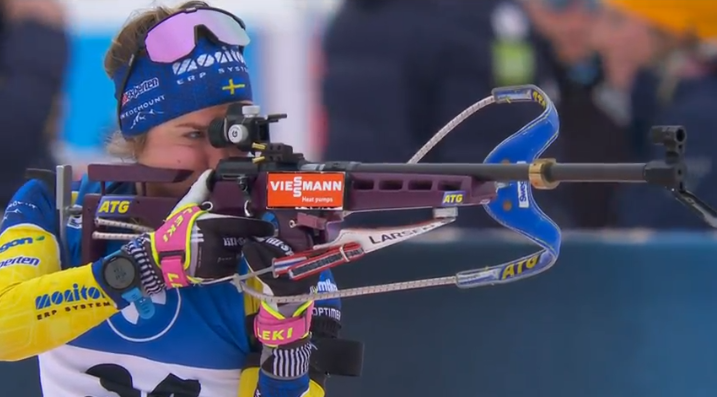 Denise Herrmann is clearly determined to win the championship. From race to race, she squeezes everything out of herself, and doesn't fall below 6th place, except for a small failure in the pursuit of Kontiolahti, where she was 16th.

So in this sprint, Herrmann had bib №6, and one of the first to set the pace, and finished in first place. True, she had one miss on the prone, but even with it, it seemed that she had a chance to win. And indeed, Hanna Oberg and Julie Simon blundered at the ranges, where they earned two penalties loops for each, Lisa Vittozzi lost her best form, and the rest were just random guests in this fight for the BCG.

But just the middle peasants made this race interesting. Linn Persson, after the first shooting, confidently became the leader, and although she missed on the standing, she was still ahead of Herrmann by a second. But the race was even better for Anna Magnusson, who was almost as fast in the first two laps, but also managed without penalty loops, and her advantage before 2.5km to finish, was 9 seconds.

It seemed that now Herrmann and Persson were just eating Anna, but no. Magnusson save all her stamina for the last segment of the race, which she had the strongest. She won 3-5 seconds from both the German and the teammate. Even the fast-footed Elvira Oberg lost 6 seconds to her, Magnusson's last lap was so powerful.

This is the first victory, and in general the first podium for the Swede. Prior to that, her best result was 7th at the Beijing Olympics.

For Linn Persson, this could also be the first victory, but alas, only the second place. Two weeks earlier, she already had a podium in Kontiolahti.

The content of this news could have been somewhat different if the young Frenchwoman Sophie Chauveau had had enough power for the last 500 meters of the race. With a kilometer to go, Sophie was in second place, gaining 1-2 seconds from Persson and Herrmann, then there was a descent and a gentle part of the track, where she could not lose much. But on the last bunch of small climbs, she no longer had any strength left, and as a result, she remained behind the podium, showing only the 4th time.

Marie Eder reaches 5th place. It's been 5 years now that Marie hasn't had a podium at the World Cup.