France won women's relay at Hochfilzen, Sweden and Italy on the podium 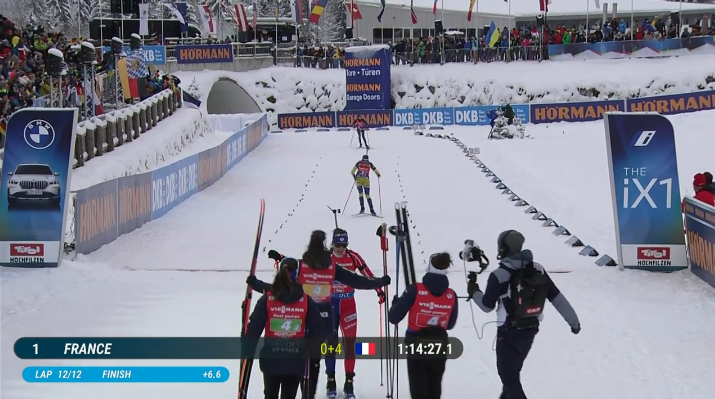 At the first stage, all the top teams roster the weakest ladies from their squad. Previously, the Italians liked to put the strongest on the first stages, but they also abandoned this tactic.

The first stage was won by Linn Persson. Rebecca Passer of Italy, Lyu Jeanmonnot of France and Anna Weidel of Germany were 15-20 seconds behind.

But for the second part of the relay, France and Italy have already introduced «heavy artillery» - Anais Chevalier and Dorothea Wierer. They easily caught up with the Swede Anna Magnusson, and broke away from her. The Frenchwoman had problems on standing, and used two extra cartridges, so the Italian team became the leader by the middle of the race.

Meanwhile, the German team was still going without a miss, but Franziska Preuss couldn't catch up with the leaders, and on the contrary lost another half a minute in her stage, despite the perfect shooting.

Italian Samuela Comolla couldn't resist Chloe Chevalier, and even more so Hannah Oberg. The Frenchwoman caught up with her, but this chase caused serious problems for Hanna Oeberg at prone, and only with the help of 8 shots she managed to close all the targets. And she lost the third position to Vanessa Voigt.

Сomola and Chevalier had problems at standing, and while they waited out the wind, Oeberg and Vogt managed to join them, as a result, the whole four went to the final lap together. There were only 9 seconds between the Italian and the German. Here, Hanna Oeberg showed her speed and ran away from her rivals. On the end her stage, she won 12 seconds over Chevalier and Voigt.

By the way, Anamaria Lampic joined the fight here as part of the Slovenian team. Fervently started, winning back the leader in the first lap of 30 seconds. On the prone, she fired slowly but accurately. But the standing didn't submit to her, and as a result, Lampich ended her stage in the same place where she started - 2:20 from the leader. But increased position from 12th to 9th.

At the last stage, Elvira Oberg decided not to force the race, and quite calmly ran the lap, her rivals even reduced the gap. However, the Swede still needed an extra cartridge, unlike Julie Simon, and the gap was completely leveled. A little behind Lisa Vittozzi and Denise Herrmann had problems - they were already 20 seconds behind.

At the last standing, Julia Simon fired like she was in training, and left as a leader for the final lap. Elvira Oeberg and Lisa Vittozzi lost 16 seconds to her, but the fight didn't work out, the Italian began to fall behind a little. Denise Herrmann lost too much time, and she no longer fought for medals.

The efforts of Elvira Oberg were not enough, and Julia Simon brought the French team to victory. Lisa Vittozzi held on to third place, and the Italians were on the relay podium for the first time in a long time.