Sturla Laegreid and Johannes Boe - creators of the Norwegian triumvirate 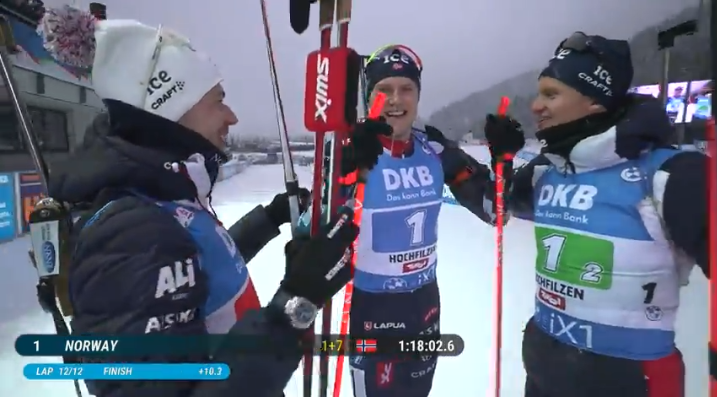 At the first stage, Sturla Laegreid tore apart his rivals. Not the best shooting (3 misses on the standing), but even with such an indicator, he's gone for the last lap as a leader. And for these 2.5 kilometers, he managed to break away from his rivals by 10-30 seconds. Only Jesper Nelin lost nothing to him, who finished this stage second.

But the hero of the second stage, unexpectedly, became Tomasso Giacomel. The Italian, without extra cartridges, was able to close all 10 targets, and was able to keep the lead until the relay was passed. Sweden and Norway were 5 seconds behind, and France - was 15 seconds behind. Germany is 45 seconds behind, it was Johannes Kühn who couldn't close one target on the standing.

However, already at the next stage, Johannes Boe almost immediately took the lead, and began to create a gap from his opponents. Only Emilien Jacquelin kept up with him.

On the prone nobody has any problems. Femling and Zinglere were behind Jacquelin at a respectful distance, but Roman Rees was already half a minute behind this pair. The rest of the peloton was a minute behind the race leader.

No one was able to withstand the pace of Johannes, and he continued to build up the lead. And the rhythm in which he worked on standing, deserves the highest praise. Jacquelin and Femling also shot normally, but were already 40 seconds behind the Norwegian. In the meantime, Roman Rees has already overtaken Zinglere and become 4th.

And then, the ginger Boe showed his best, and at the end of his stage, he passed the relay to Vetle Christiansen with more than a minute advantage.

No one was even close to Boe's pace. Perhaps the best of the rest was Roman Rees, who lost only 12 seconds.

At the 7th shooting, Christiansen managed prone without problems, while Samuelsson and Fillon Maillet had some problems, and Roman Rees almost completely closed the gap on the Frenchman. Going 5th Olli Hiindesalo no longer claimed a medal, as he was a minute behind the third position.

Christiansen had such a lead that he could well afford even several penalty loops, but limited himself to one. Sebastian Samuelsson also didn't create intrigue, the Swede hit all the targets and left standing in a solid second position.

A potential fight for third place also didn't come out. Roman Rees ran away from Quentin Fillon Maillet, and brought the bronze to the German team.