The Swedish won the first relay of the season, Germany and Norway on the podium 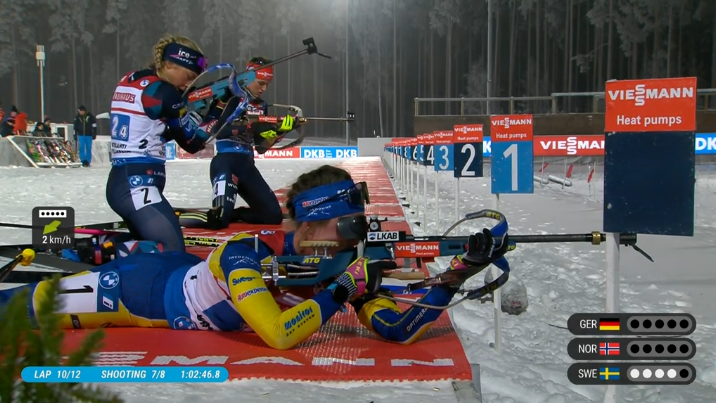 At the first stage of this relay, there were no excesses, except that the young Frenchwoman Lou Jeanmonnot got worried and used 4 additional shots, 40 seconds behind the leaders.

In the second stage, Anna Magnusson took the lead due to fast shooting, but she went so slowly along the track that Ida Lien and Sophie Schneider caught up with her, and Vittozzi, Hauser, Chevalier, Gasparin and Kinnunen significantly reduced the gap. And then luck was on the side of the Italian, and Lisa Vittozzi led the way to her final lap. However, she couldn't escape, they quickly got her.

Finnish Kinnunen was in 8th place and was 20 seconds behind, but the next pursuer, Estonian Tomingas, was more than a minute behind.

Hanna Oberg decided to immediately recognize who is the leader of WC, and immediately began to break away from her rivals, maybe this was the reason for two extra rounds, but even these misfires did not prevent her from maintaining her leadership. Chevalier, Voigt and Femsteneivik were 10 seconds behind, Aita Gasparin was still 10 seconds behind. Mari Eder and Julia Schwaiger were already more than 40 seconds behind the Swede.

Elvira Oberg took leadership from Hanna and didn't disappoint. The rivals kept at a short distance, but could not get the Swede. A fervent start for the Swedish national team.

Representatives of Norway and Germany competed for second place. Ingrid Tandrevold and Denise Herrmann kept together throughout their race, but at the last standing, Herrmann lingered a bit on the shooting and had to catch up with the Norwegian. And the German was much more tenacious. It didn’t even wait a “wall”, overtaking happened much earlier. Tandrevold ran, and thank God.

The French women are only 4th, the Swiss became the 5th, and this is their position.