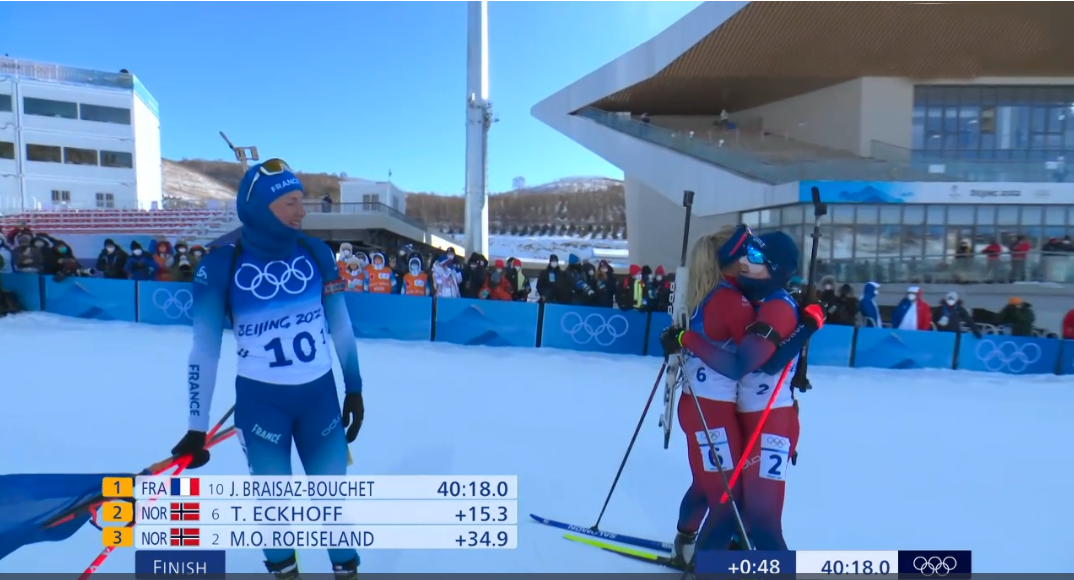 A rare sight when by the second shooting the group of leaders consists of only 6 athletes, usually there are at least 10 of them. But Tiril Eckhoff and Marte Roeiseland took a high pace and unhooked several people at once. And then the Norwegians also managed to shoot cleanly, and completely went to the 3rd round together.

But on the 3rd shooting, the wind was waiting for them, which was so serious that both Norwegians didn't even shoot for twenty seconds. Then Marta got tired of it, and she started shooting, and quite successfully - only two misses. Julie Simon, 30 seconds behind before the start of shooting, went off to rewind her penalty loops even before Tiril Eckhoff, who still hesitated to start shooting. But in the end, Tiril has two misses.

Elvira Oberg and Justine Braisaz miraculously managed to hit all 5 targets, and Marketa Davidova hit 4 out of 5. And such a powerful company left for the penultimate lap.

Justine Braisaz decided to go all-in, and broke away from the leading group, making a reserve for herself in 15 seconds. The French woman decided not to wait out the wind, not to aim, she shot very fast, and made only one miss, while the pursuers went to rewind 2 loops or more. Two Norwegians left for the final lap 50 seconds behind, Marketa Davidova walked next to them, but the Czech could not even indicate the fight.

On the finish lap, Tiril Eckhoff broke away from Marte, and won the silver.