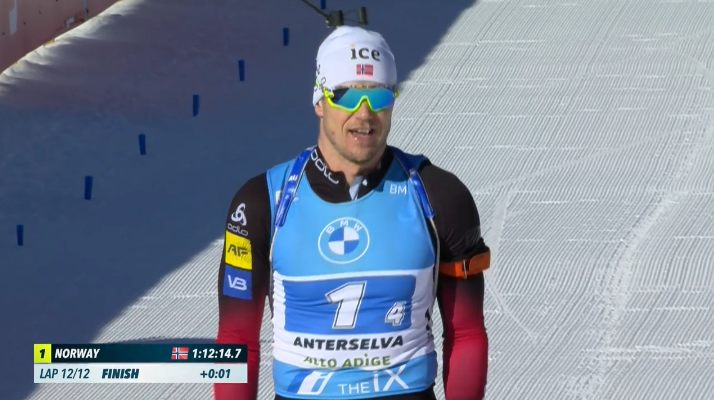 Of course, all the Norwegians were good today, only four misses per team, but it was Johannes Boe who made this race. Johannes took the baton from Tarja with a 7-second advantage and gave it to Christiansen with a minute advantage over the nearest opponent. And Vetle, due to perfect shooting, further increased the advantage. Do it at the same on the Olympics!

Everyone, absolutely everyone, lost a minute or more to Johannes Boe, so the fight for second place was between France, Germany, Russia and Ukraine, but already at a noticeable distance from the Norwegian. Ukraine almost immediately fell off this group of pursuers, while the rest more or less held on. Eduard Latypov, who came out of quarantine, even was going to the penalty loop, but this didn't stop him from still fighting for the podium for his team.

France decided to put the absolute debutant of this year - Eric Perrot at the last stage. The young Frenchman didn't shine with speed, but he banged on targets, no worse than Johannes Boe, and quite deservedly went to the last lap 11 seconds ahead of the German Lukas Fratzscher, and another 10 behind, Latypov tried to correct his shooting mistakes.

Unfortunately for France, Perrot lasted literally half a lap, and Fratzscher overtook him on the first climb, and a little later, Latypov. The Russian almost immediately took out the German, and already in front of the stadium he stepped forward and brought silver to his team.

Norway won by a two-minute lead over the rest, making the Swedes, and seven other teams, lapped!