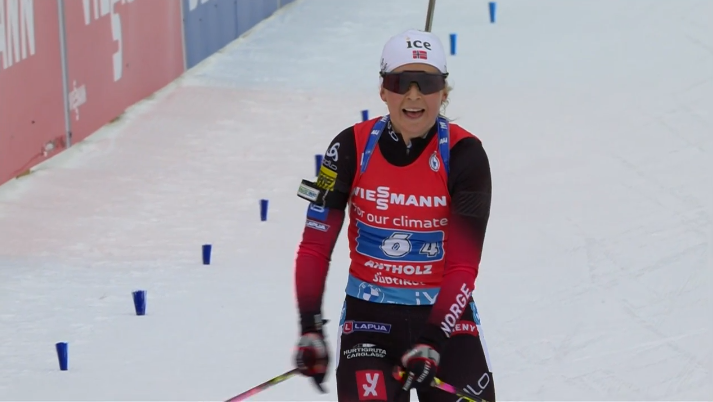 This race definitely shouldn't be considered as a full-fledged victory of one or another team. The absence of many leaders of the national teams of Norway, Sweden and Germany, terrible conditions at the shooting range. Someone was lucky to shoot in a calm, someone was unlucky, and she got into a storm. It happened that the first shields did 5 out of 5, and the next ones already was going the penalty loops.

The Russians were in the lead for a long time, but Irina Kazakevich at the 3rd stage completely shattered the hopes of the Russian team to win, going to 3 penalty loops. Lucie Harvatova, in the fight against Ingrid Tandrevold, flew off the track.

The best, or the luckiest, in all this turmoil turned out to be the Norwegians. This is their first win this season.

The French women were always close to the leading group, and only at the last stage, Anais Bescond, was able to get around her rivals and take a clear second place, but battle just began. Ulyana Nigmatullina rushed after her, Federica Sanfilippo and Joanna Reed were 10 seconds behind. And if the American isn't so fast, then the Italian was almost able to catch up with the French-Russian bunch.

Probably, Anais Bescon hasn't good form, otherwise how to explain the fact that on the rise the average Russian woman get away from Bescond, then the Italian also caught her. And only the photo finish gave preference to the French.