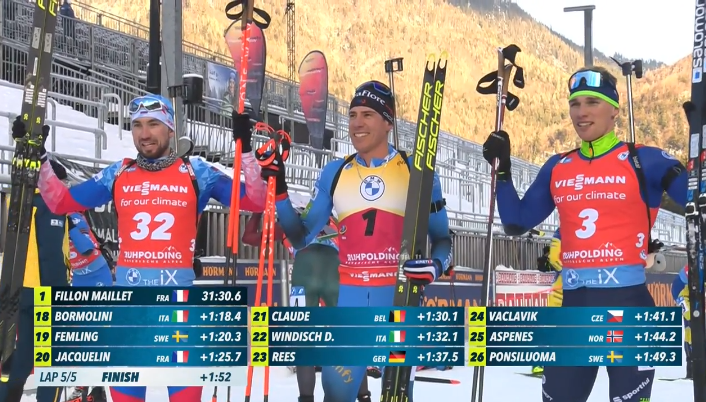 Not very well began this race Fillon Maillet, having lost the lead even on the first prone, but the Frenchman gradually got close to the German Benedict Doll, who came forward, and when he made a mistake twice on the rack, he completely pulled ahead with a very comfortable advantage over the others.

Alexander Loginov and Maxim Tsvetkov started the race great, but if Tsvetkov made two mistakes in the last standing and moved back, then Loginov at the right time surpassed all his rivals, and came out on a clear third place, bypassed the Lithuanian Vytautas Stroloa, and took second place! Impressive breakthrough from the 32nd starting place.

Anton Smolsky left for the last loop 6 seconds from Loginov, and even caught him to the mark of 11.7 km, but then the Russian broke away from Belarus, leaving him with another bronze.

The day before yesterday, the Lithuanian Strolia suffered a drama when in the sprint he was only a second behind of the first podium in his career, and for Lithuania. Today he was also very close to the medal, going to the finish lap second, but unfortunately, by the middle of the lap he lost to Loginov, Smolsky, and even Simon Desthieux.