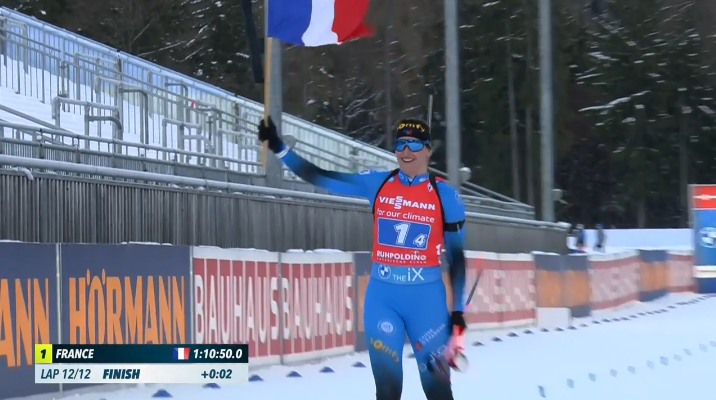 In the absence of the main team of Norway, and Hanna and Elvira Oberg from the Sweden team, the French team was considered the unconditional favorite, and although the French had to be nervous, the victory remained with them. The French flag on German ground ... it's good that without spectators.

Surprisingly, Sweden, even without the Oberg sisters, can show a high result. Two misses in the whole race - something unusual for the Swedes, especially in the composition of which Scottheim and Nilsson.

Third place went to the Russian team, which for a long time walked at a respectful distance from the fight for medals, but at the last stage, the strongest Russian woman at the moment, Kristina Reztsova, caught up with the Norwegian and Italian, and after the final shooting she completely went into the lead.

Italy, as usual, was in the lead for half the distance, thanks to the efforts of Vittozzi and Wierer, and starting from the third stage, when the strong biathletes ended, they gradually slipped into the middle of the protocol and finished 6th.

Surely the Germans would like to see their squad on the podium, but Vanessa Hinz lost as much as a minute on her stage, all because of unsuccessful shooting. Denise Herrmann was pleased on the last lap, winning back 3 positions at once, and finishing 4th.

Belarus, thanks to the efforts of Kruchinkina, Alimbekova, and Leshchenko, kept close to the leader of the race until the last stage. Hanna Sola is still not in the best condition after her illness, and already on her first lap it became clear that she was not keeping pace with Julie Simon. And one penalty loop in the prone completely buried the chances of Belarus for another medal.