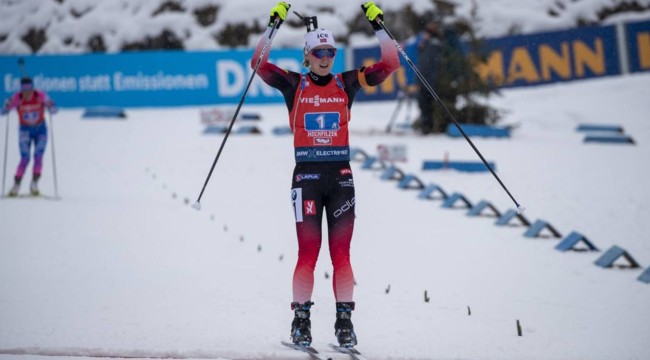 Marte Roeiseland confirms his status as the World Cup leader and wins the first sprint of this year. The Norwegian started with the number three, but finished first, and no one could surpass her result.

And the second place was shared by Hanna Sola and Julie Simon, who showed exactly the same time. The Belarusian missed twice on the prone, and literally pulled herself by the ears, beating Tandrevold and Alimbekova on the last lap. It seemed that there would be two representatives of Belarus on the podium, but no, Julie Simon didn't lose a lot of time to Sola, and the organizers will have to find another silver medal somewhere.

Very dense results from 4th to 8th place, within five seconds, five athletes settled down at once, in addition to the mentioned Alimbekova and Tandrevold, these are Reztsova, Chevalier and Mari Eder. For a Finnish, this is the best result in the last two years.