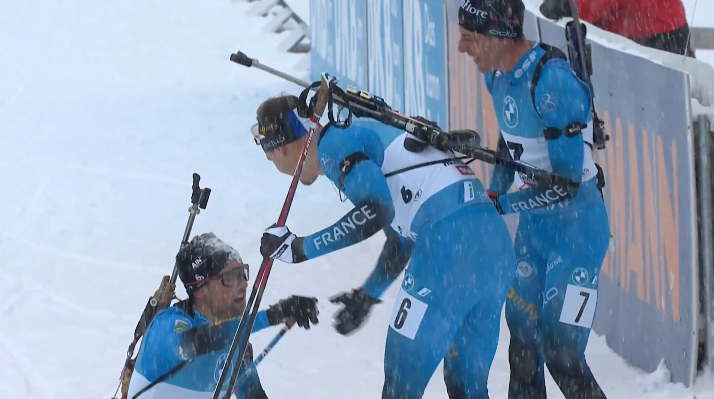 The French were unique today. Quentin Fillon Maillet allowed only one misfire on the first prone, but almost immediately got involved in the fight, and «deshot» Johannes Kuehn in the last standing. The German was cold-blooded until the last firing line, but in a duel with the French, he surrendered - as many as three misses, and Kuhn didn't even take part in the fight for bronze.

Emilien Jacquelin was practically the only one who was able to shoot without mistakes for the 2th standing, and alone finished after Quentin.

And the cherry on top was Simon Desthieux, who managed to break from 24th place to 3rd. (After the finish it turned out that the transponder on the Swede's leg was working incorrectly, and from the photo finish it was determined that it was Sebastian who crossed the finish line first. French 4th.)

It has been a long time since there was such a massive struggle for medals. Leitner, Tarjei Boe, Legreid, Smolski, Desthieux, Samuelsson, Seppala, Hofer, Tomshin - they all really claimed the last place on the podium. Tarjei Boe was the first to roll out to the finish line, but Desthieux and Samuelsson began to bypass him on both sides, and the Swede didn't have enough.

Anton Smolski dropped from 3rd to 6th place, but this is also a good result for Belarus.