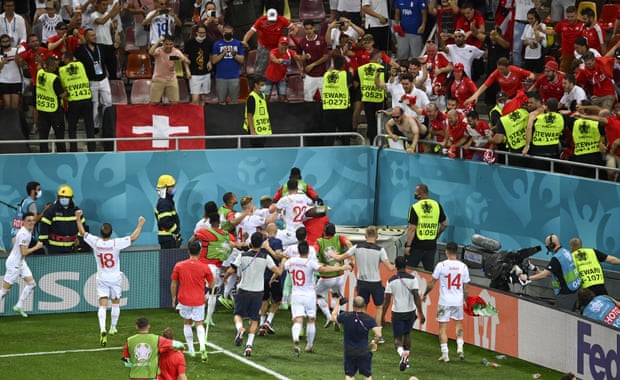 Who would have thought that the pairs Croatia - Spain and France - Switzerland would give out the two most scoring matches at Euro 2020!

You have to subscribe to Lazy and Crazy Sports, where are a lot of video about Euro - https://www.youtube.com/channel/UCbe4nlbGNAehfUe32X8aeQw

The Spaniards started with an own goal in their own goal, thanks to the efforts of Pedro Gonzalez, who almost from the center of the field gave a pass to the goalkeeper. My personal opinion is that Pedro is to blame, firstly, the pass was with a rebound, and secondly, you cannot give a pass to the goalkeeper on target. But this did not break the Spaniards, by no means, they continued to attack Croatia, and already in the 38th minute Sarabia distinguished himself. Azpilicueta increased the advantage in the second half, and even the old man Fernando Torres was able to score against the Croats.

It seemed that everything - the 80th minute, the Croatian national team is losing two goals, and has never scored on its own. But in the 85th minute Pasalic found Orsic with a cool pass, and he closed the pass, and in the 90th minute Pasalic himself pushed the ball into the goal of the Spaniards. So the Croats were saved, but only delayed the inevitable. Already in the third half, the Spaniards rolled two more goals, and were again ahead. The Balkans had a chance for one 100% goal, but Pasalic missed the target from a destructive position.

It all started very well for the Swiss. They managed to score a goal in the 15th minute through the efforts of Seferovic. And in principle, the game was equal. There were shots on target and just dangerous moments. But before the break, the score did not change.

And in the 55th minute, the game became a turning point. Zuber fled to the attack on the left flag, tried to slip through, but Pavard clearly upended Zuber, but Zuber managed to get up, continue the game, and even give an inaccurate pass, so it seemed that the incident was over. But after a minute, the referee stops the game and goes to watch the replay, after which he assigns a penalty to the French goal. And what is so possible?

The penalty kick went to punch Rodriguez, and missed! Lloris reads his intention, and parries spot kick. And after 5 minutes, the score was already 2-1 in favor of the French, who quickly dealt with the demoralized Swiss. Another veteran, Karim Benzema, scored twice. And 15 minutes later, Paul Pogba put an end to this confrontation, it seemed at that moment.

But no! Switzerland does not give up, quickly playing one ball to Seferovic. And already in the 92nd minute White carried out a great attack and Gavranovich on the edge of the box before firing into the bottom left! Lloris had no chance!

30 Minutes of Overtime, penalty series, and Switzerland are throught, the World Champions of 2018 are out!